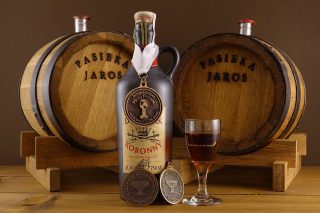 DWÓJNIAK KORONNY – a typical dwójniak produced with equal parts honey and water with a mixture of specialty herbs from Poland and produced with mainly dark autumn honey.

Matured by aging. Stored in both stoneware and glass bottles. The alcohol content is around 16%. A drinking wine marked by freshness and smoothness surrounded by the deep aroma of Polish honey.

Awarded many medals including:

This site uses cookies. By continuing to browse the site, you are agreeing to our use of cookies..
▲

To enter the mead page you need to be at least 18 years old.